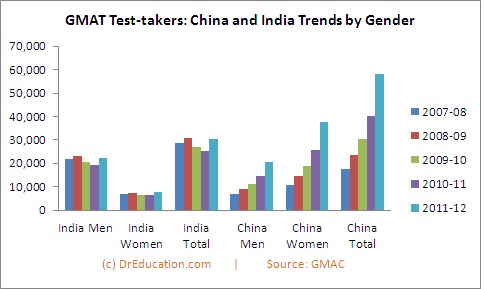 This year also, the growth was driven by test-takers from outside the US. Number of GMAT test-takers outside the US increased by more than 19% as compared to stagnant numbers for US test takers. Over the five years, average GMAT test-taker volume for the US citizens was 123,552 (–1.7%) and for rest of the World it was 140,702 (+9.0%).

Outside the US China continues to grow at a clipping rate while India is showing signs of recovery from declining numbers in last couple of years.Within China the growth was driven by young women in early 20’s while for India it was late 20’s to early 30’s.