Indian and Chinese MBA aspirants are showing more differences than similarities, according to the recent GMAT data for the testing year 2010 (July’09 to June’10). While the number of GMAT exam takers with Indian citizenship has declined by 12 per cent between testing year (TY) 2009 to TY 2010, it has increased by 29% for Chinese in the same period. 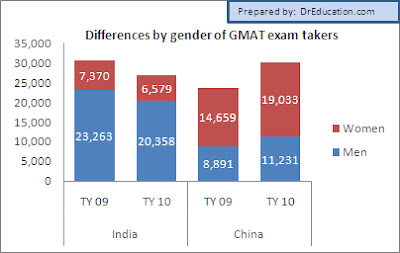 There are significant differences in terms of intentions to study abroad by age and gender of Chinese and Indians. Nearly three times more Chinese females (19,033) take GMAT exams as compared to Indian females (6,579). In addition, number of Indian females taking GMAT has decreased by 11% while it has increased by 30% for Chinese females. The ratio of male to female is completely inverse for Chinese and Indian GMAT exam takers. While, females constitute only 24% of total Indian GMAT exam takers, it constitutes 63% for Chinese. 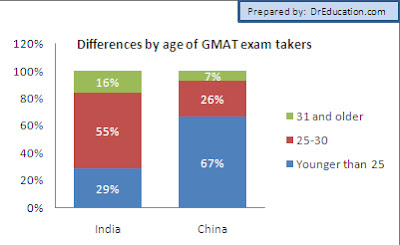 Chinese and Indians are also showing different preferences for destinations. Number of score reports sent to US B-schools by Indians has decreased by over 10,000 while it has increased over 14,000 for Chinese. While the US has has seen steep decline in preference for Indians, the UK and Canada have shown positive growth. 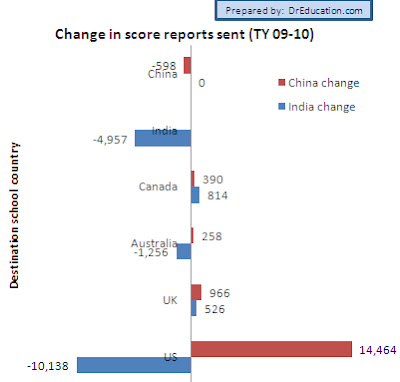 The decrease in Indian GMAT test takers is a complex interplay of several variables including recession, future job prospects, cost of foreign MBA and availability of local programs. Unlike, MS programs, many MBA programs do not offer financial aid and hence students usually take loan to pay for education. However, decreasing prospects of jobs due to recession have deterred many to take large sum of debt for foreign MBA. In this context, availability of local executive MBA programs like Mumbai Business School and School of Inspired Leadership, which do not require GMAT scores have gained popularity.

In addition to general factors influencing GMAT test takers, Indian women face sociocultural pressures of early marriage and family. Foreign MBA programs require some work-experience, which makes even more difficult for women with family to get support for investing time and money in foreign MBA. This in turn results in limited number of inspiring role women models who have pursued MBA abroad.

Overall, Chinese GMAT exam takers are more likely to be young female, less than 25 years as compared to working male, greater than 25 years for Indians. This has direct implications for the university leaders and admissions officers in terms of segments to focus for recruitment. At the one end of the spectrum there are leading global B-schools, which are seeking quality and diversity and number are not the issue. On the other end of the spectrum, there are many other B-schools which are seeking numbers. Depending on the strategic priorities and goals of the B-schools, recruitment and outreach strategy for India and China should be vastly different and adapted to target segments.

Related posts:
China beats India in the race for quality in management education
Drivers of Mobility of Indian and Chinese Students