After eight consecutive years, India loses its spot as the leading country of origin for international students in the US to China, and that too by a big margin of 22,731 students.

Growth directions of Chinese and Indian students enrollment in the US are showing a sharp contrast. There were 3,137 less Indian students enrolled in graduate and undergraduate programs in contrast to 22,511 more Chinese students in 2009/10 as compared to 2008/09 (IIE Open Doors 2010). These numbers about contrasting growth directions exclude students on OPT (Optional Practical Training) and “Other” non-degree categories and hence indicate real change in student enrollment in the degree-programs at undergraduate and graduate programs for 2009/10 academic year. (Note: CGS reports fall’2010 admissions trends for graduate programs only, while IIE Open Doors reports previous year’s enrollment at all levels). 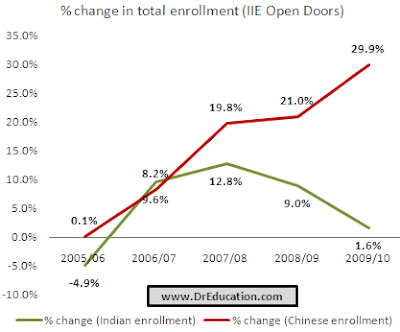 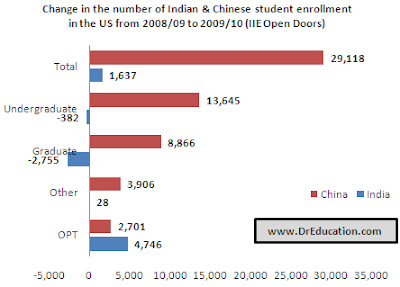 This significant increase of Indian students in OPT is a direct effect of a very effective policy initiative by the US which allows for extension of OPT from regular 12 months to 29 months for STEM fields. This rule came into effect from April, 2008 and its adoption became more valuable with the recessionary cycle. Given that 57% of all Indian students are enrolled in engineering and computer science programs (see related posting), which qualify for 29-months OPT rule, many Indian students are opting for OPT. Under this arrangement, technically, a students is still “enrolled” in an academic program with an F-1 visa and hence included in the IIE Open Doors numbers.

Where are Indians going?
The UK have been the biggest net gainer of Indian students. Enrollment of Indian students in the UK increased by 8,160 in the period 2007-08 to 2008-09 (Universities UK). More recently, the visa statistics for 2010 admissions indicate significant increase in interest for the UK. This is a result of three interrelated factors:

1) The Australia effect:
The concerns of safety resulted in nearly 5,000 less students enrolling in the Australian higher education (excluding VET etc.) in September 2010 as compared to last year. In fact, total enrollments and commencements (new enrollments) declined by nearly 20% and 48% respectively. Lot of this traffic got redirected to the UK and Canada and less to the US.

2) US didn’t gained from the loss of Australia:
US gained little from the redirecting of the traffic from Australia. This is primarily because even if Indian students are interested in studying in the US, their acceptance rate from the universities is decreasing. This in turn is a result of the very narrow set of institutions in engineering and business which Indian students apply to. Indian students also tend to rely heavily on assistanships and these are much harder to get because of the budgetary crisis of US public universities. See the detailed analysis here.

The trend for fall’2011 admissions will be quite similar where UK along with Canada will continue to attract traffic from US and Australia. For the fall’2012 admissions cycle, US economy would have stabilized and Australia would have overcome it’s “unfriendly” image for Indians, over-representation of Indians in business and engineering would prompt UK to slow down, while rest of the Europe with Bologna master’s programs will gain traction, and Canada will attract talent leveraging immigration and funding policies.

Overall, Indians will continue to seek opportunities to study abroad and will be more open to explore alternative destinations. Although, US will remain the leading destination in the short-term, its preeminence is doubtful in the long term.