While the number of students going abroad from China and India are increasing, their enrollment patterns and preferences vary considerably by pace of growth, destination, field of study and level of study. Here are four key comparisions:

Interest for foreign education is growing at a much faster rate among Chinese as compared to Indians. For example, the number of applications for fall 2010 admissions to US has increased by 20% from China as compared to 1% from India (CGS). Likewise, undergraduate enrollments in 2008-09 for Chinese students grew by nearly 10,000 students as compared to about 2,000 Indian students (IIE Open Doors). 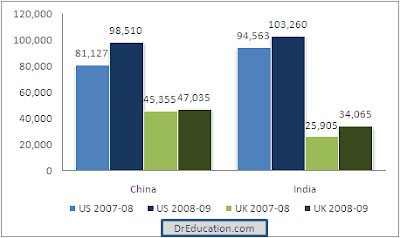 There are several reasons for the differences in the enrollment patterns of Chinese and Indian students. However, three key reasons are size of education systems, ability to afford education and future career expectations/options. Supply of students seeking foreign education is higher for China as compared to India. China has about 27 million students enrolled in tertiary education as compared to 15 million for India (Global Education Digest).

Chinese have nearly double purchasing power than Indians (World Bank) and Chinese students also get more concentrated support as a single child in their family. This helps them pursue busines programs which are expensive and offer little financial aid as compared to engineering where assistantships are more available. Given the growth of Information Technology services industry, Indians see engineering as an attractive career options with opporunities of long term settlement in the US.

Indians anyways prefer to study abroad for the master’s level education and UK universities are becoming more popular because of better return on investments from the one-year master’s program. On the other hand, Chinese are already in large number in the UK, which is indicating more preference by the UK universities for Indian students.

I will be posting addtional analysis after the IIE Open Doors data is released in next couple of weeks.