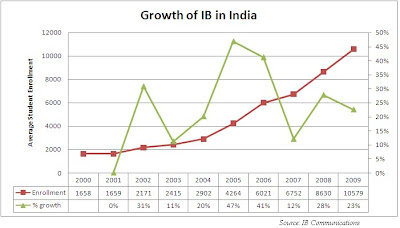 What is driving the growth of undergraduate level enrollment for India? The primary factor is the increasing base of wealthy individuals who have both the willingness and ability to spend money for better quality education both in India and abroad. Most of the Indian students (~70% in the US in 2008/09) have been studying abroad at the graduate level as duration for these programs is 1-2 years as compared to 4-years of undergraduate programs and also because they get funding in the form of assistantships/scholarships at graduate level as compared to limited scholarships available for undergraduate programs. Thus, affordability was the biggest constraint for Indian students aspiring to study abroad for undergraduate degrees.

With the increasing economic growth and expansion of elite class, affordability is finally catching up with aspirations. According to Merrill Lynch, although 2008 was a terrible investment year, the number of High Net Worth Individuals (HNWI with invested wealth of at least $1 million) Indians was 84,000. The population of HNWI in India is projected to be more than triple the size in 2018 as compared to 2008. Overall, this suggests larger base of prosperous families who would demand quality education and afford expensive undergraduate college for their children.

The growth of International Baccalaureate schools in India is an indicator that emerging wealthy class of India is ready to shell out significant amount of money for higher quality education.  For example, annual fee for IB programs could very easily be INR 100,000 per month (~US$ 2,000 p.m). At Oberoi International School, Mumbai, the annual tuition fee for IBDP (XI and XII grade) is INR 600,000 (~US$ 12,000).To put in perspective purchasing power of INR 600K, one could buy a brand new Ford Fusion in India with this money.

Even at this high price, IB has seen consistent growth in number of schools and enrollments (see Table). Currently, there are 65 IB World Schools in India offering one or more of the three IB program with more than 10,000 students registering for IB exams across the grades for 2009. The number of schools offering IBDP (XI/XII grade) doubled in three years from 30 in 2006 to 61 in 2009. Likewise, average number of students registered for IBDP grew four-fold in six years from 390 students in 2004 to 1650 in 2009.

This trend of growth of international schools is not limited to IB programs and other boards like the University of Cambridge International Examinations have become quite popular and have more than 200 schools offering its programs. A recent story in the New York Times noted that the enrollment for all international schools across grades grew to 45,873 in May’09 from 32,276 a year earlier and 5,600 in 2000.

Even though the IB program faces some challenges in terms of curriculum and compatiability with the Indian education system, it has emerged as a promising route for students aspiring for undergraduate education abroad.Undergraduate admission officers should leverage this opportunity of engaging and attracting students at international schools to attend their universities.
– Rahul